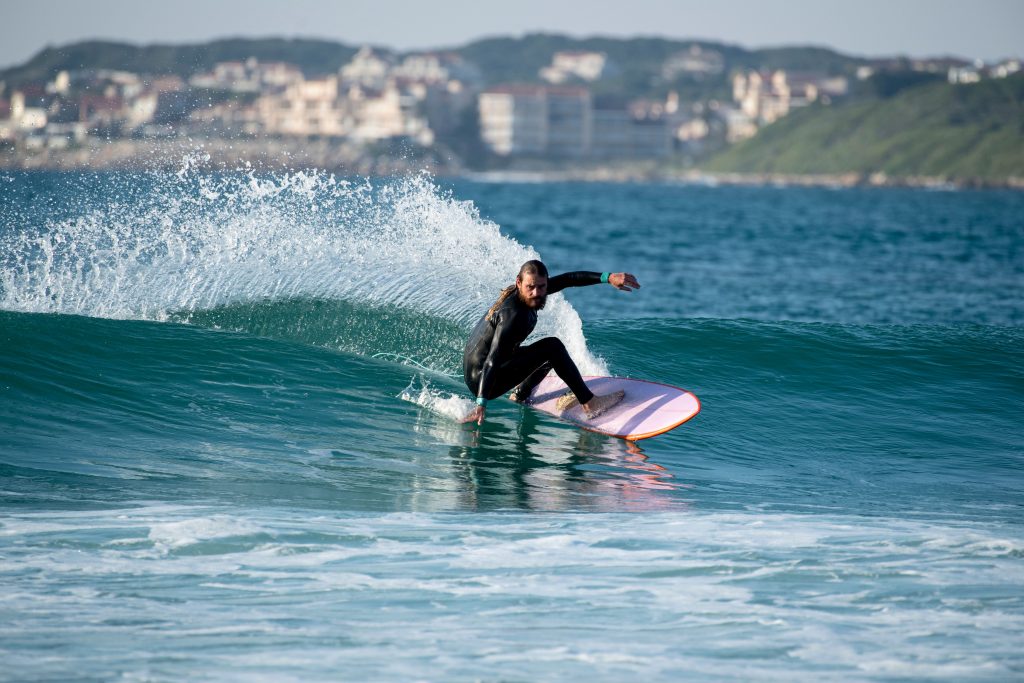 Mystery Man – A joyful glimpse into the life of Stevie Sawyer

Stevie Sawyer is one talented human. Delightfully adept on any craft, he could even make a door look like a viable wave riding instrument. And his surfing talent, although never needed or questioned, has been validated at the highest order with a WSL world title for longboarding in 2018. On the other end of the spectrum he also won a wildcard spot into the Corona Open J-Bay in 2016 where he held his own against the world’s best short boarders. While those two disciplines might bookmark his competitive track record, it’s everything else in-between that makes Stevie one of the most liked and easy-to-watch surfers in the world.

He started surfing at 9 years of age and the bug really bit after receiving a surfboard from Damien Hobgood, as a gift while he was in J-Bay for the Billabong Pro.  With a supportive family, a legend shaper as a dad and the right-hand point breaks of J-Bay as his playground, Stevie’s surfing life understandably took off. From mastering his local breaks on all sorts of craft, to writing and playing music down at the local watering hole, to travelling overseas and learning the craft of hand-shaping from his dad, Stevie’s story is not only one that has to be told, but followed closely, because the next few chapters are only currently being written.

Here’s a glimpse in the past, present and future of one of the world’s most interesting surfers.

Stevie, you’re such a talented surfer. Riding different craft from shortboards, to twinnies, longboards and logs. Why do you think it’s so easy for you to switch up between these genres?

My dad, being a shaper, always challenged me to ride other friends’ boards in the surf so I could get a better idea of what I liked. Eventually I got asked to surf an Eastern Province longboard trial because there weren’t enough surfers in my age group for the team, so I got a free ride to the South African Champs event.  From there I couldn’t put the short board down, couldn’t put the longboard down either, so I just chopped and changed and I guess doing that from a young age helped me big time. Your imagination at that age is limitless.

Which craft comes the easiest to you and which was the hardest to master?

I don’t believe I’ve mastered anything yet. That’s the beauty of surfing, you’re only as good as your next wave. The hardest thing is to choose the right board for the right conditions! Making the right choice is always hard!

You tend to switch-foot a lot, although you’re naturally a goofy footer. Is that just about having more fun in the water?

When I was young coaching with Graham Hynes (South African National Team Coach) for example, or even free surfing, if I got frustrated with anything and the tension or pressure got too high, I’d go switch to raise the stoke levels again. When you’re not the best surfer, doing anything on a wave is exhilarating and that was my release. Go switch and see what happens. You’ve got all this knowledge on technique, but could I apply it on demand? Be ambidextrous? That was enough of a distraction from the pressure!

Being the WSL 2018 World Longboard champion, we take it longboarding is your preference. What was that experience like for you?

It was unreal! I had solid crew in my corner and after every wave, there was this huge war cry from the beach, the support was insane. I also just felt it was my time. I had confirmation in my heart that this was the event. There were certain signs that came up during the whole event too that played in my favour and I knew that this was the Lord’s message to me; that if I stay in line, it’s gonna happen! Thinking about that contest now still gives me such a buzz.

With 2019 being a challenge (coming back from an injury) and then 2020 being on hold due to Covid – what do you miss most about the longboard tour and what are you looking forward to in 2021?

I miss the family. I love seeing familiar faces in different parts of the world. I can’t wait to compete again, it’s fun putting time limits on your schedule, mixing preparation and opportunities. But mostly the family vibe in tour.

Shaping has been such a part of your family since childhood days with your father, Des Sawyer, being a world-renowned shaper – how did it influence your surfing?

My dad and our relationship always had a developmental vibe, where he bettered me in my surfing and I bettered him in his shaping. It’s a great challenge having a father pushing you all the time and visa-versa.

Being locked down I’ve decided to give the shaping bay my all. Now is my most valuable time to inherit my dad’s knowledge and from there I guess, it’s just timing. But I’m loving every moment of it, well most of it 😂

You seem to think out of the box when it comes to boards/shaping and riding different craft. You recently shaped a board that you can surf both ways (just changing the fin setup) – tell us more about it?

That board is still in heavy R&D phase, but the overall idea is, that if you have a fairly levelled rocker, your board is gonna fly regardless. It’s just finding the sweet spot where you can ride it both ways. I’m hoping for the end result to have one side for speed and glide and the other side more for lip sliding, floating and hopefully get some air on it. But I find boards that get in the air have a generous rocker in the nose to help launch the board and not get the nose caught on a lip or chop etc.

What was it like growing up as a J-Bay local?

It was hard growing up trying to sit on the main takeoff spot. As a grom you get told to sit down the point. You’d see all these insane waves peeling down, but you just get the scraps. It took a few years to start moving up the lineup. There’s a solid local pecking order in the water here, and learning to deal with that was hard, but I am super thankful for it now. It’s funny how some things are strange and at times antagonizing at first, but after being in and amongst that tune, you find there’s actually order to it. So, there’s that (getting your waves) but having J-Bay as a training ground was insane. Such a close-knit group of friends pushing each other, we had plenty local club contests that unfortunately faded out and don’t run anymore, but the standard of competition was so high! I’d love to start something up again for the younger community. There’s a lot of lineage lost that needs a new flurry.

Music is forever! I’d have to say a mix between blues, reggae, jazz, rock and funk – that would be my ultimate blend.

If you were to compare performing versus surfing – two different levels of stoke?

Traveling with surfboards and a guitar can be tricky but you seem to make it work – what items do you sacrifice to make it all fit?

I try not to travel with guitars anymore. I try pin one down before flying overseas. Other than that, we generally travel to the same places so I have a few friends on speed dial if I need a guitar in a heartbeat.

People really enjoy spending time with you, catching a glimpse into the life of Steven Sawyer. You seem to live such an authentic life, true to who you are and removed from other’s opinions/approval. What is it that makes Stevie tick?

Rising to new opportunities everyday, the ones you’ve laid out for yourself and the ones God has inline for you, which will ultimately inspire your neighbour to look for the same.

Thanks for your time Stevie! We love having you in our RYD Tribe and cannot wait to see where life takes you in 2021 and beyond.  All we know is, if its anything like the last 5 years, it’s gonna be a blast… and we’re totally coming with you!